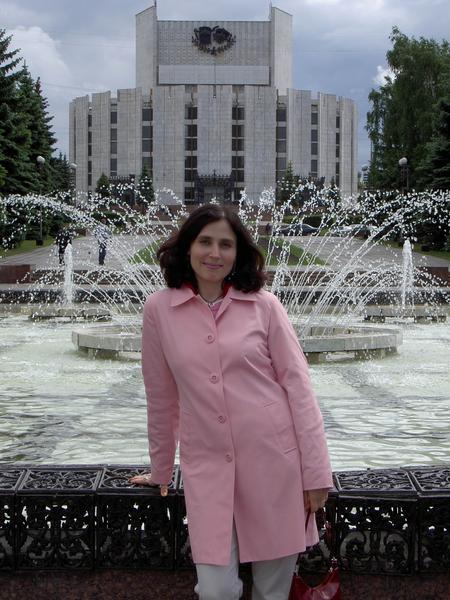 I just want to share my impressions after visiting this May (2004). I needed to get new Russian passport plus I missed my family so much that I decided to go there for 2 weeks while I can. One never has time or money for that... Unfortunately Mike had to stay in US because he just recently found new job.  At first I thought about taking Ester with me but decided to go alone because it's really long trip from to .

And as I foreseen problems started to arise from the moment I reached the JFK airport. Our plane was late for 6 hours because it was delayed in for 6 hours earlier... So, I had to spend like 8 hours in the duty free zone. Can you imagine how would it feel if I had Ester with me?? And problems didn't finish here. Because of this huge delay I missed my plane from to and the next one will fly only after 2 days. Surprisingly Aeroflot was ready to pay for 2 night stay in the hotel for me but I said that I need to go to as I short in time. Finally instead of flying to I took the flight to Yekaterinburg that was leaving 1am at night. After other 5 hours wait I was on the plane and arrived to Yekaterinburg at 5 in the morning. Of course the trip didn't end here as I had to ride a bus to that takes about 3 hours. Couple tram stops later I was finally in my parent's home. I felt very happy that I've done this trip alone without Ester...

BTW, I used text messaging a lot to talk to Mike in US and to my relatives in and it really worked well. It costs 5c in US and 35c in but still so much cheaper than use my cell phone with all the possible roaming charges. BTW, our GSM phones really work fine in .

During two weeks stay I've changed my passport and done lots of other business matters but the main goal was to see my relatives and friends. I've seen all my aunts, uncles and cousins and most of all I was glad to see my grandma Mara. To me she didn't changed much since I left and she was very happy to see me. Unfortunately she never saw her grand granddaughter but I brought plenty of Ester photos for her.
Also I was very glad to see Alice, my friend from school years, and we spent really good time with her. And of course I was very excited to see my friends from university. It was so pleasant that they all wanted to meet me and we spend great time talking as we didn't see each other for 6 years. Lots of them have children already, so we had one more topic to talk about :-)

as a city itself changed a lot. It definitely became more modern and european. There are a lot of new shops, malls and supermarkets. You can buy anything you want just need to have money of course. Some shops even offer discount cards for the permanent clients like here in US. The real difference is the presence of European goods and this is what we dont have enough in US. Cell phones are the whole separate story there. Almost everybody has a cell phone and a good one. Cell phone stores are everywhere and sell lots of European and Japanese phones that I never seen in US Dont even get me started on the hundreds of available accessories.
Also there are so many goods for children including books, puzzles and etc. I wanted to buy the whole shop for Ester...

Now there are so many restaurants in the center of the city and lots of look quite fancy. Surprisingly all the waitresses are very polite and friendly and this is very different from what it used to be. I, my sister, her daughter and my mom went to 'Sicilia' restaurant and I was impressed by the beautiful decorations and good menu. I think Americans would feel good in such kind of place, of course Russian language would be a little strange :-) Another time my mother-in-law, my cousin with his wife and myself dined in the 'Tomato' cafe. Pizza was really good and tasted almost like American one. Once I looked in the magazine that advertise different business in and found that one could go to Russian, Italian, French, pizza, steak and etc restaurants ... My well-known passion is sweets, so I was happy to find that there are a few coffeehouses that serve various pastries and cakes. Of course cakes are so much better in that in US that I was afraid to gain extra pounds :-) Those coffee places looked very modern. 'Penka' looked very much like 'Starbucks' and 'Apelsin' reminded me of hip coffeehouses in the . Forgot to mention: all the stores and restaurants are clean and shiny too.

The center of the city is changed a lot. The newly renovated street is called 'Arbat' now and it has a few of small shops and cafes along with a stage for a band and lots of benches. So it became a popular place for young people and teens. Natives are very proud of this place Gagarins Park was renovated completely and now its so beautiful place for children to play and have fun. Id take Ester there without a thought. We went to the Arch of Love that was build while I was away. Its very romantic place now and every couple go and dance there during the wedding day. Fortunately many movie theatres were renovated as well and one can easily watch new American and Russian movies.

Despite all of this there are still lots of things remained. is much cleaner than before but still dirty comparing to US. Also there is so much dust especially in the summer. Old Russian cars became cheaper and more people are able to buy them alone with the rich people buying foreign cars. So the air smells bad in the city as the gasoline quality is lower than here. BTW, there are so many cars on the street that people start to stand in the traffic jams during peak hours. Of course such traffic jam is nothing comparing to a jam in the tunnel but it will get worse in couple of years. It's very difficult to navigate a tram or a trolley already. Also that nobody repairs houses anymore and it's very dirty and disgusting in the corridors. The worst thing is that one can still see drunken people outside during a day and especially evening...

More about good stuff. My friend sings quite well and so she knows lots of musicians in the city.
One evening we went to 'Taxi' jazz/blues cafe that has life music almost all week long. The band played some jazz, blues and even rock-n-roll. I just loved the place that reminded me of . The club really looked like one of jazz clubs in the south including the two-story setup, small stage and tiny tables... It turned out that hosts International Jazz festival every year during summer. So my parents, my aunt, me and Alice went to the last day of this festival and spent really 7 hours listening to the Jazz and Blues. It was really crazy evening but exciting. I've never seen and listened to so many different groups and soloists and so much music at once...

At the end I want to describe my experience at the beauty salon there. It was recommended by my mom's friend and really looked good. Everything looked new and shiny inside; the girls were very friendly and polite of course. I just went to have pedicure and manicure and decided to try 'apparatny' pedicure. It's new technique that came from and one's feet are polished using special machine, not manually. The results were perfect; my feet looked like baby's feet :-) Also in the beginning I was offered a glass of juice and a cup of coffee at the end. I was overwhelmed by all these things. Of course the salon was quite expensive in rubles but it was a good price for me in dollars. Honestly I don't have so much money to pay for the same level of service and quality in .

Two weeks passed very fast and I had to leave. My sister drove me and parents to the airport and of course the surprise was awaiting us there. My plane was delayed for 4 hours again. So we drove back home, had a nice second dinner and went back. This time everything was ready and I left .

After arriving to I met my mother-in-law who helped me to spend a time between the flights. We decided to leave luggage in the airport and go to the city center. We walked down the Tverskaya avenue, been near and of course visited famous Arbat. became really clean city and definitely looks like capital. Stores on look like the ones on in , I bet one even needs so much money too... We couldn't leave Arbat empty-handed so we had a cool caricature of me done in 15 minutes. The artist was good and I really look myself in the picture.

After coming back to the airport and spending an hour in the lines to pass custom and passport control I was finally in the duty free zone and ready to fly home to US. The thing worth mentioning is the passport control in . In my memory it was always unpleasant and rude experience but I guess this also has changed. Both ways I didn't have any problems, an officer didn't ask many questions and didn't look at me like I was a spy. I was pleasantly surprised and told Mike that we can go to safely now.