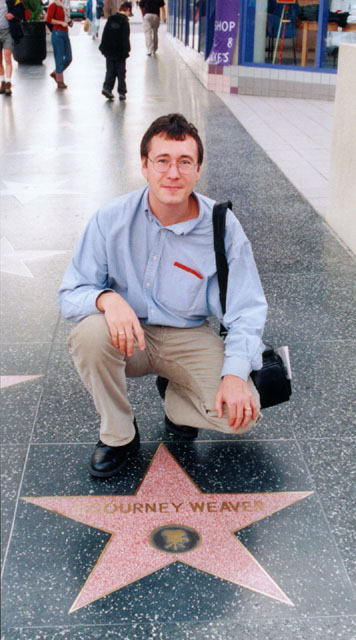 2001 New Year was coming and we didn't want to spend it in cold New Jersey. So, we bought tickets and took off for Los Angeles. And the adventure started immediately!

I still remember a feeling when we came out of the airport and warm fragrant air surrounded us. The air smells differently in LA! And you see the palms in the airport already. We reserved a car thru Budget but ... all the cars were rented out and they didn't have any in stock! Can you believe that? And the rental place is located far from the airport plus it was around 11pm at night so we couldn't even try other places. Thankfully the shuttle took us to the hotel and then next morning we tried to find a car for rent. It was easier said then done! All reputable agencies had no cars in stock, then Mike started calling small rental companies and was lucky enough to find a small Honda for rent. They picked us up at the hotel, brought to the rental place to do the paperwork and then we got out Honda. Haha, this Honda was maybe 6-8 years old, it could ride faster than 60 miles per hour and every piece of it was making some kind of noise :-) Plus it was priced at $70 per day! So, if you ever go to LA on a holiday reserve a car at a couple of agencies in advance to be safe...

Anyway having a car was a big plus. At first we walked at the Hollywood boulevard with embedded stars and we saw handprints and footprints of different movie stars near Mann's Chinese theatre. I made a picture with Bruce Willis's prints and Mike wanted a photos with Sigourney Weaver's star! Also we drove through Sunset Boulevard which is very nice, it has palm trees on the both sides of the road. Exactly like they usually show in the movies! And then we drove to the Beverly Hills and walked on Rodeo Drive, like a girl from the "Pretty Woman" movie. That is a street with many very expensive shops like Armani,Versace, Chanel and etc. Most people just walk around and only look at the windows or try to spot famous stars shopping there...

We drove around the downtown and then went to Venice Beach. Venice Beach was a very nice place where people hang out, shop a bit and eat. We really like it's atmosphere. The weather was warm but not hot so we couldn't really swim in the ocean ... From there we also drove up north to Malibu along the shore line to see the surfers and also look for cool villas of rich people living out on the hills across. Malibu has gorgeous mountains and beautiful ocean view... We also went to Santa Monica promenade. Santa Monica has many good shops and restaurants for regular people :)
It was December 31st which were were going to celebrate with our friends from Las Cruces. We were very excited to see them! We've met New Year with Denis, Natasha, Jan and Karine at the Greek restaurant. The celebration was cool and joyful! We ate, drunk and even danced Greek dances around the restaurant :-)

On the January 1st we visited Universal Studios park, saw different theatrical shows there and real decorations and stages from the famous movies. The park is huge and we probably visited only 1/3 of it. OF course it's really crowded there but it is a lot of fun. In the evening we've been on Medieval Times dinner and show where people see knight competitions while eating a dinner. Unfortunately the whole experience was lame as the food was cheap and bad, the whole place wasn't very clean and the actual performance was very low budget and too simple. We were disappointed, so we never go to such shows anymore. But granted, 8 years passed since then so maybe they have improved?

Last day we did a walking tour at the Paramount Pictures Studios which I reserved in advance. Paramount is the only studio still situated in the Hollywood district and it's easy to get to. We saw real stages and sets outdoors and indoors. The tour was fun but we didn't meet anyone famous :-( I'd do similar tour again there. As it was around New Year time there were no TV shows filming during our tour but we got to see the sets anyway.

And at the end we had a lot of troubles getting home from LA. When we boarded the plane engine didn't want to start automatically, so they started it manually. Then when the plane was on the driveway they decided to ask mechanics to check the engine and returned back to the gate. The engine and computers readings were all right, so we tried one more time. Almost before the take off the engine just shut down completely ... It was scary... We returned back to the gate again...(2 hours passed already by this time) Next we were ordered to leave the plane and wait one hour for further instructions. Finally they admitted that the plane is broken and they don't have pilots for another plane... And they didn't have any flights to Newark this day, so we flew to JFK overnight, then waited 1 hour more for a free shuttle to Newark, spent 2 hours driving there...and...at last came back to our car which Mike had to dig out of snow. NJ felt very cold especially after LA :)