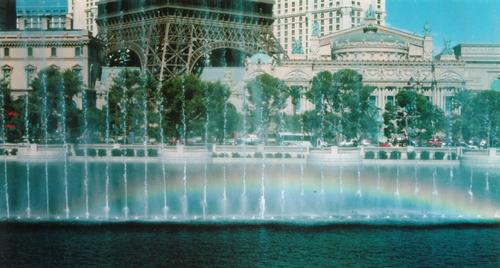 We had a great time during July 4th, 2001 holidays. As some of you may know we've been in Las Vegas!!! It was very exciting and this time we didn't have any problems with airplane!

What can I say about Las Vegas? It was very very hot. One can not walk on the street more than 5 minutes. It was about +115F (+46C) during a day. It was better in the evening just enough to breath calmly at least... Nevertheless we even had a rain once...

So, this is our trip. We arrived Friday night and Saturday morning we were up and ready to browse Las Vegas Strip. We lived in inexpensive hotel, Fitzgerald's casino, in the downtown. It's situated just on the Fremont street. Most of the huge and famous hotels are located on the Strip. It's a long avenue, about 2 miles and this is a place where all people are hanging around. All cool casinos are just right there. On the first day we looked through several hotels/casinos.

Mirage is a gorgeous hotel inside and outside. It has many good restaurants and great buffet, possibly the best. The main attraction is Siegfried&Roy Secret garden with beautiful white tigers and lions, they are so cute :-) There is a large fountain outside of the Mirage hotel, in the evening it becomes a volcano every 15 minutes. Volcano is very colorful and you can see it free...

Venetian is a very beautiful hotel inside. We liked its "shopping mall" the most because it's actually made like a part of real Venice. It's located on the second floor. After getting there you enter Venice ...You walk and shop along the canal, eat in the restaurants by the canal and etc. The sky is very real and even lights change during a day. I was thinking I'm in Italy :) And they have a gondola rides on this canal. Of course we couldn't miss it and rode in the gondola during the evening. Every gondolier sings specially for you...very romantic... Also we've seen actors in the appropriate costumes that were singing in Italian for us. The swimming pool for the hotel guests is located on the third floor above the venetian sky... :-)) In case somebody is interested there is Madame Tussaud museum in the Venetian hotel.

Nearby is the Treasure Island hotel that has great decorations outside with pirate ships and pirate death mask actually. They run a free show called "Pirate Battle" every evening. We've arrived there 20 minutes before show and the crowd was already standing waiting. Can you imagine that? Looks like people come 1 hour before just to see the show and, remember, about very hot weather.Anyway, we've seen the show that was interesting but does not worth an hour wait of course.

Last but not least was the Caesar's casino. Casino is decorated nicely inside and has beautiful fountains on the strip. The Caesar's attraction is the talking statues of Gods in the Forum shops. There is a fountain in the middle of shopping mall with the statues. Those statues wake up and talk every hour (free again). We've been there in the afternoon when we were completely tired of sun and welcomed a huge margarita. This margarita was a yard long, truthfully, and we were drinking it together for long time. I was surprised that some couples had 2 of such yard margaritas and were drinking it without any problems.

How could I forget about Bellagio? Bellagio is a one of the new hotels, it's also huge and has wonderful botanical garden. It's small but smells like heaven... Bellagio has a fountain show starting noon every 15 minutes as well. This is probably the best show in Las Vegas. We've seen it during a day and at night. This show is a fountain dance over a classic opera/music or even jazz song. It's so special...

In the evening when we came back to the downtown we also saw Fremont Experience show that is projected on the big ceiling at the Fremont street. Quite interesting but not very exciting.

2nd day
Next day we had a great adventure. You, folks, would not believe it. We flew on the hot air balloon! Yes! We always wanted to fly it in Arizona but what's hack, why not in Las Vegas?! We woke up at 4 am and were picked up at the hotel at 4:45am. Then we met with the whole crew and after that they set up the balloon and we were ready to go. The balloon was very huge and colorful but the basket was so small. It had a place only for 3 people+pilot+3 gallons of gas. Why did we fly so early? Because a balloon can not fly during a hot day and it needs cool air. So the balloon was successfully blown and in 5 minutes we were up flying. We flew for about 1 hour over the Las Vegas suburbs. It was little bit scary of course to look down but don't be afraid. As Mike told me even if the balloon gets a hole it will fall slowly because it's so big like a parachute... And actually it does have special holes that a pilot can use to turn the balloon. Our pilot was very friendly and knowledgeable man and he explained us everything. I was also afraid of landing but it was very soft and fine. At the end we've been given an inauguration with champagne shower :-)))

Remember that the second day just started and we were ready to research Las Vegas further. This time we arrived to the end of strip. We started from the Luxor casino. The hotel is a huge pyramid with a large sphinx that is bigger than the Egypt's one. The hotel is greatly decorated with hieroglyphs and it has IMAX theatre and Tomb and Museum of Tut's. Museum is not exciting and basically has a copies of several things we really saw in Egypt. Tomb is not a Tomb but just several walls and you even can't go inside there. This was a total robbery... And we didn't like Luxor's buffet, it was messy :(

Mandalay Bay is just beside Luxor and has wonderful small garden with fountains. It was more of asian/indian style.We decided to skip Shark Bay there because we just recently have been in Baltimore's Aquarium.

Excalibur is another hotel/casino besides the Luxor. It is built like a medieval castle and has many knights and dragons statues inside. The casino itself is also decorated in the same style. Excalibur also has a free show - Dragon battle but we didn't have time to see it.

The day was not finished yet for us. I've reserved tickets for Siegfried&Roy show and so we saw the show while drinking Mai Tai and Bloody Mary. The show was very loud, colorful but not so exciting as expected. I wanted to see the "O" show of Cirque Du Soleil but good tickets were sold out even a month before :( After the show we visited sushi restaurant in Mirage and sushi were very delicious, better than we have in New Jersey :))

3rd day
Even before we knew about many mountain parks in Nevada. First we wanted to go to Death Valley but we decided not to go because we would be dead there in such hot weather. So instead we rent a car and visited 2 parks more closely located to Las Vegas. First we visited Red Rock Canyon, it's very picturesque park and has a scenic road. It also has many trails but we didn't go because of the hot sun again.There are many funny cactuses as well.

After that we drove further to Valley of Fire. It's big park and really beautiful. We've made many photos there as you can imagine. And I was so stupid to go by some short trail in the afternoon to see some "Mouse Tank". Mouse tank was a small puddle of water, not exciting but I was completely killed by the sun and hot air. Guys, never go on trail in Nevada during summer! I think it was about 120F in this park that day :( But it didn't stop us. We still had some time and drove fast to Hoover Dam. I saw it in the movies and wanted to visit it myself. So we just made it 15 minutes before closing. Dam looks grand as in the movies. What else can I say? Instead of dam we liked Lake Mead that is very huge and lies between the dam and Valley of Fire. It was so blue that day and we felt better just by looking at it.

4th day
After flying on air balloon we were so excited that decided to do something similar again. So we reserved a glider ride (glider is a plane with wings but without engines). We've been picked up at 8:30am and drove to the small airport nearby Las Vegas. We flew together with Mike on the back seat of the glider, and a pilot was on the front seat. It was a 3 people glider, they also have 2 people glider but we can't be separated with Mike, can we ?! A small plane took off and pulled our glider at the same time. After 15 minutes we reached about 5000 feet and then a pilot freed the lock and so the glider was flying alone without a plane now. We were flying like birds, quite fast , about 60 miles per hour, over the mountains. Just imagine...we...mountains...blue sky...and Mike making photos from up there... Those mountains reminded us about Las Cruces... After soaring for 25 minutes we landed very simply and softly again, I was surprised how easy it looked actually. Later we've been told that many people has their own gliders and just fly themselves, looks like it's easy sport (?).

After that we've been dropped on the strip and moved further through the hotels. MGM Grand has a great screen with movie ads and great cafe that is inside African jungles. It also has a lion habitat where we saw a few cute small lions playing with people (special trainers, of course). I guess lion is a MGM symbol and there is a large lion statues near the entrance of the casino.

New York-New Your casino stands on the opposite site of the strip. It's also huge and hotel simulates  several main NY structures like Statue of Liberty, Empire State building, Chrysler building and even Brooklyn bridge. Inside the food plaza is exactly like regular New York street, you can easily find pizza there.

In the evening we visited one more well-known hotel there - Stratosphere. The tower is very high and has good view of Las Vegas. There are 2 roller coasters but they were closed that evening because of the thunderstorm. Nevertheless we've been up and looked over the bright Las Vegas strip at night. The view is breathtaking, every hotel flashes and lights individually. Las Vegas never sleeps, really, people play day and night!

Paris also simulates another city (one can guess) . It has several French restaurants and Eiffel Tower. One can go up and see the city. We didn't have a chance as it was closed this evening because of the thunderstorm again :(. And it really came after 1 hour :-) Paris is located across the street from Bellagio and its fountains. So we were eating on the veranda there and looking over every fountain show during that evening. It was a romantic night...

5th day
We flew back home... When we left it was still sunny and hot in Las Vegas and Mike made several photo shots from the plane when we've been in the air. After couple hours nature became different and weather too. It was very cloudy in New Jersey. And of course when we reached highway enormous rain started to greet us home... It was 4th of July, 2001.