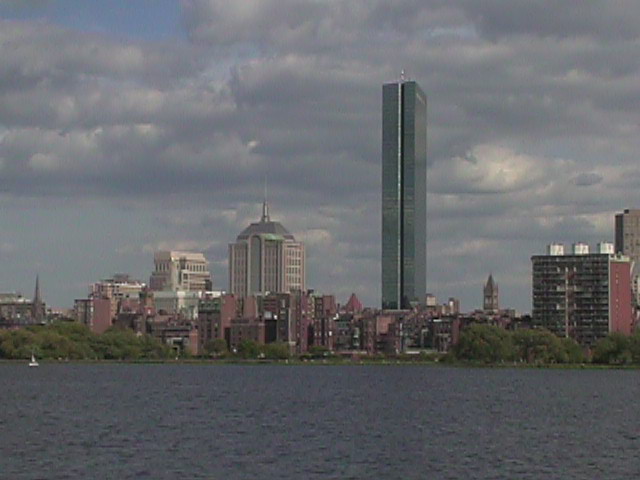 We took our friend (together with his car) and drove to the Boston in May, 2000. We spent couple of days there exploring Cambridge and Boston itself.

Cambridge is located across the river from Boston and there are very nice views of Boston downtown from the boardwalk in Cambridge. There are 2 very famous universities - Harvard and MIT. Harvard looks very similar to Princeton, same old style of buildings, and very green.It's very enjoyable to walk around the campus, look at the building and status as well as students around. We also spent some time at Harvard Square having lunch at one of the cafes there. It's a good place to hangout, browse the shops and cafes.

MIT is a complete opposite of Harvard. Its buildings are quite standard, modern and very simple. No wonder that MIT is famous for its science and IT departments while Harvard is famous for its Law School, for example. So, unless you study at MIT there is not much to explore there.

Cambridge also has a shopping plaza called CambridgeSide Galleria with a dock for small cruise ships. This is an opportunity to relax and enjoy an hour boat ride on the Charles River. Basically you can make photos of Boston and Cambridge at the same time.

Boston downtown is small and can be explored completely on foot. But of course the most fun type of exploring Boston is the Boston Duck Tours. I think the duck tours were first introduced here, in Boston. We were very excited and certainly enjoyed the tour a lot. We drove around the downtown and on the Charles river. If you never taken duck tour before it's fun to watch how a tour bus becomes a boat :-) They have really cool tour guides, our driver was joking a lot and I think everyone had a really great time. We'd highly recommend taking this one.

If you are interested in photography like we are there are two main towers available where one can go up and see Boston sky overview. Unfortunately views are good but it's hard to make good pictures as you are never outside, so you have to shoot thru glass. We've been in Boston twice so we were on top of Prudential Center as well as John Hancock tower. Prudential Center is also a big mall so it's a good opportunity if you like shopping.

Of course Boston is famous for it historic sites. So you should take a Freedom Trail. We did it ourselves but some companies do offer an official tour of that area.

What else is there? There are few beautiful churches that we really liked along with the fountains. For example, Trinity Church is very grand. As I said just walk around and explore. Public Garden located in Boston Common is very enjoyable and relaxing. You can take a paddle ride there.

And last but not least we visited Museum of Science. It's a big museum and we were really impressed by it but didn't get to see everything. It has an IMAX theatre which is the most fun if you have no kids or old enough to appreciate the beauty of IMAX movie.

At last I want to mention Holocaust Memorial in the downtown Boston. It's located on the Freedom Trail near Congress street. I didn't see it but my mom was very impressed it. Glass columns is designed in the modernistic way and contain six million numbers engraved as so many Jews were killed during Holocaust...