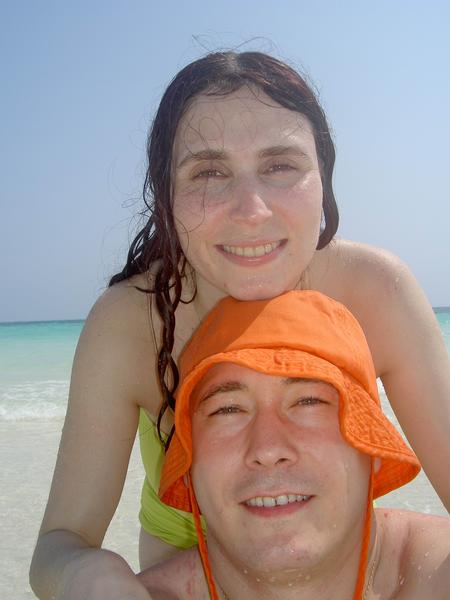 
Ester was 7months old and I was so tired that I desperately wanted to get out of the house and work. So we took a really short trip to Bahamas while my mother-in-law was caring for Ester at home We flew to Miami in the evening and then flew to Grand Bahamas Island next morning. The airplane was tiny, one person sat on each side of the corridor. But the flight was nice and short and the sky was very blue. We were lucky as the weather was great during 3 days we were there.
We stayed at Pelican Bay at Port Lucaya, it's not a resort but located very close to the beach, has nice swimming pool and conch grill every afternoon :-) We thought that conch is really delicious. The hotel has really nice big rooms with granite floors, big beds and balconies. This hotel is located near Sheraton Grand Bahama Island at Our Lucaya Resort, so we could use their beach and drop in the restaurants at the resort. There are few restaurants nearby including Ferry House. That place is amazingly good, serves a mix of French and Caribbean cuisine. We went there twice during our stayed and loved it. It's in the walking distance from the Pelican Bay hotel. There is also Lucayan Marketplace that contains many small shops and vendors as well as cafes and restaurants to browse and hangout.
Besides the dining one can stay all the time on the beach but we always get bored quickly. So of course we rode big banana which was the hardest and most challenging as the guy controlling it went nuts on us trying to make us fall overboard on every turn! And then we also tried paragliding which was lots of fun and not scary at all but expensive, so you can't do this too often. And we also rented seadoo and had fun riding around. Both Mike and I were driving it and I think general idea was to speed up as fast as we can :-)) I'm still smiling when I recall our experience there...
On a second day we actually rented a car and drove around the island. The drive itself was fun because you need to drive on the left side of the road plus there are no traffic lights, only roundabouts. And even roundabouts are left handed, so it was really challenging to turn around brains inside out. We didn't rent scooters but they were available and we plan to do this next time we are on the islands. At first we went to the Lucayan National Park which is located on the other side of the island but has the most secluded and beautiful beach on Grand Bahama Island. We saw totally white sanded beach, clear blue waters and only couple of people there ...
Then we visited Parrot Jungle's Garden of the Groves. It's very lush tropical garden with waterfalls and beautiful flowers and birds and you can even pet parrots there. You could also spend long time watching alligators leisurely hanging out there. WE returned the car in the evening and spent last day browsing at the marketplace, hanging on the beach and dining at the huge buffet at the Sheraton Resort. The buffet was very crowded but we managed to get in paying over $40 per person. The buffer was good but not great and so crazily overpriced...
Next morning we flew back to Miami and we were stuck in traffic for at least two hours. We were trying to get to the Monkey Jungle before it closes. So, we got there 30 minutes before and had to rush thru it very fast, of course we didn't have time for the shows but still got to see and feed cute little monkeys... And even a huge gorilla. In the evening we went to a nice sushi restaurant somewhere in the Miami downtown. But by that time I felt terrible as I had sunburn plus I was taking some antibiotics and it was a big mistake as apparently they increase sensitivity to light and so I became covered with red spots all over my body. Gosh, I looked really red and couldn't sleep at night at all because I was burning and itching at the same time :-( Our flight back to NJ was nightmare for me; once I got back home my mother-in-law put lots of sour cream everywhere to ease the burning but it didn't help much. As long as I remember I had hard time surviving that night and Mike and I rushed to the doctor in the morning. He had to give me antihistamine drugs along with oral steroids to kickstart the healing process. Also Aveeno oatmeal bath treatment helped a lot in the next couple of days. So next time you are sunburned buy those and relax in the bath.